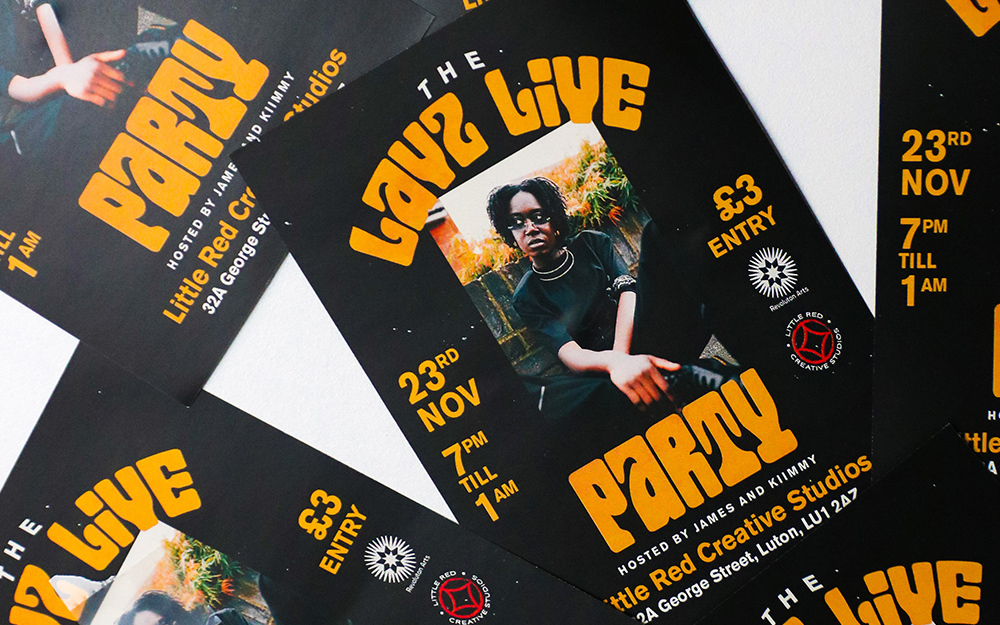 Hey, my name is Lavz and this is a blog post about finally putting on an event after putting it off for so long.

First off I want to shout out to Revoluton Arts. I heard about them last year and the rest was history. If you are an artist in Luton I would get in touch with them and share your ideas. (This is not an ad.)

I’ve had the idea of putting on a headline show for a while — as an artist, it’s a rite of passage. So with the Revoluton’s Kickstarter Mini Commissions Round 2 coming up, Jo Hudson-Lett [Revoluton’s Young People’s Producer] encouraged me to go for it.

So the planning began for the Lavz Live Party I.

I have a network of artists, DJs, graphic designers and videographers around me and it was just a matter of asking who would want to be involved with this project. Everyone was excited about it and wanted to participate.

It was important for me to do my first ever headline show in my hometown to create a space for people who make music like me to perform and party.

There is often a misconception that people creating ‘urban’ music cause trouble, so when pitching my idea to certain venues they did hesitate to allow me to use that space. Not at the Lavz Live Party. It was good vibes all round and every act and person in the room was showing love.

Luckily enough I discovered Little Red Creative Studios run by local artist Aimi Rix and she was happy to host the party there.

We had acoustic jazz, to Afrobeat to hip-hop — something for everyone! There aren’t any nights around in Luton that showcase these genres of music.

I was selling cupcakes on the night with the logo of my collective on them (we love some product placement).

The turnout was great. I didn’t go in with any expectations of the night. All I wanted to do was have a smooth-running night and got way more than I asked for. I received great feedback and even gained some new listeners.

I am grateful for this opportunity and I am definitely encouraged to do more when I can.

As for the Lavz Live Party II.. you’ll just have to wait and see!