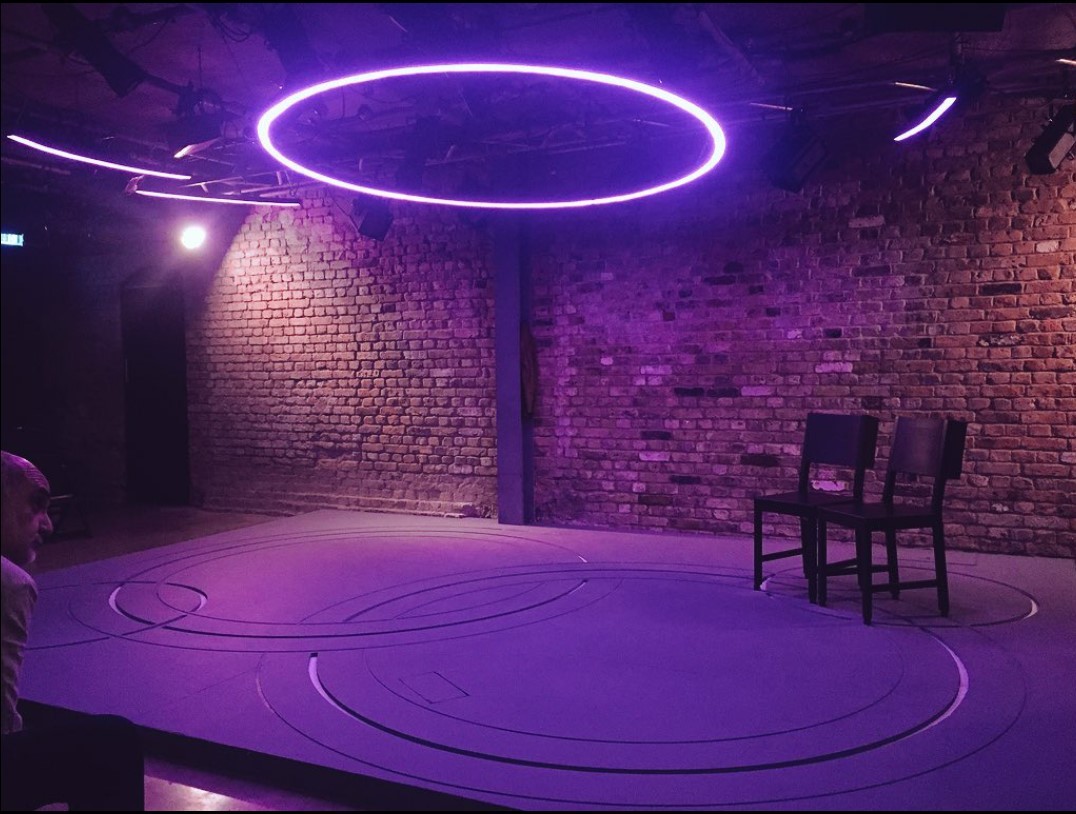 Revoluton Arts offered members of the Qalam Creative Writing Collective an opportunity to see a play at Arcola Theatre. The purpose of this visit was to gain access to a contemporary piece of theatre work written by a South Asian Muslim playwright working alongside actors and designers of similar backgrounds. I found this to be an extremely valuable form of research to help inform my own work as an emerging creative producer, as well supporting my next funding bid towards my professional development to gain experience as an artistic director. 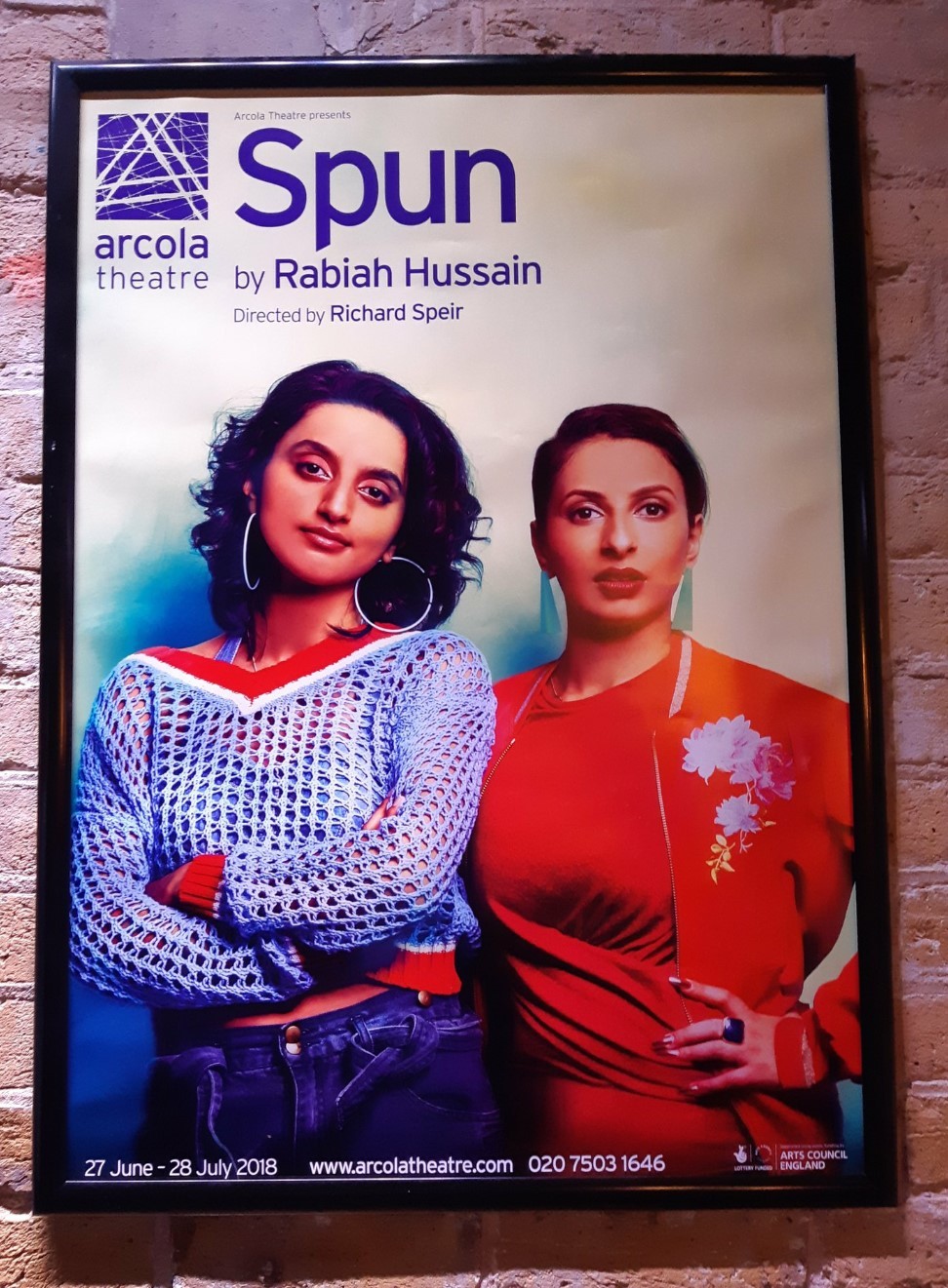 Spun is a debut full length play written by Rabiah Hussain. It is about two British Pakistani girls who are best friends born and bred in East London; they have differing personalities, but ultimately share similar experiences of growing up. The focus of the play is to explore the impact of external circumstances on interpersonal relationships, with the aim of addressing the loaded question regularly faced by ethnic minorities: “...but where are you really from?”

The play begins with the characters facing a cross-junction in their lives – graduating from university and getting prepared to take the plunge into ‘proper adulthood’. The characters, Safa and Aisha, seem to accurately represent a certain demographic of young South Asians living in East London and references to this in the script, for example Green Street, were well-received by many members of the audience. This was a subtle reminder on the importance of representation and for audiences to be able to see themselves on stage. It was also interesting to see however, the stereotype of young South Asians constantly talking in slang and using profanities as part of their communication with one another. It brings up the question of whether emerging playwrights should consider moving away from tropes and begin to challenge the narrative around working-class South Asians – it would be refreshing to see characters who are successful not in spite of their of ethnicity and class, but because of it – the key thing to focus on is intersectional diversity and the spectrum of British Asian Muslims that exist.

Another interesting plot in the play is that it uses a terrorist attack as a backdrop of the storyline – how the 7/7 bombings have a direct impact on the friendship between Safa and Aisha, and how they are perceived by those around them i.e. friends, colleagues, family etc. The lighting and the set design bring a much greater depth to the script and performances. The set design by Khadija Raza is simple yet beautifully encapsulates the notion of a world spinning out of control whilst also remaining calm at its centre. The lighting is effective in capturing the roller-coaster of emotions being experienced by the characters as they navigate their way through disappointment and heartache at the way they are treated by others through structural racism and Islamophobia. Safa’s journey, from being an immature and naive character who ends up assimilating for the sake of acceptance, portrays a deep sense of reality for a South Asian audience. At the same time, the story is able to take a jibe at the white middle class who might experience discomfort whilst watching this play, but this is actually a good measure of how successful any art form has been in creating a certain level of impact. Aisha’s journey, as a care-free individual to someone who finds a sense of belonging in her Muslim faith, is something which will resonate with Muslim women, especially in the current socio-political climate. There is, as of yet, however, no plays showing Muslim characters embracing their faith for the sake of their religious beliefs and values - recent plays with young Muslim characters portray an affinity to Islam either as a ‘sign of radicalisation’ or a political act, but never as a spiritual journey which might be more accurate, but perhaps such stories would sell less tickets at the box office?

Despite this, it needs to be acknowledged that continuous stories of Muslims linked to some or any sort of terrorist incident will always perpetuate certain stereotypes and pigeon-hole creativity, therefore, we should ideally let Muslims speak for themselves and give them a platform to share stories which are important to them. Spun was extremely successful in presenting a more balanced and nuanced Muslim experience. It is true, of course, that many emerging artists, producers, directors, actors and playwrights of black and minority ethnic heritage are on their own journeys and are still processing their own thoughts and feelings in a post-9/11 and post-Brexit era, which will naturally come out in their work, but there needs to be a point in the near future where we are able to create work to challenge the status-quo and for it to be a means of breaking the triple glass ceiling – of being a woman, being brown and being Muslim – until then, I look forward to seeing more creative work which successfully represents true diversity, and also the prospect of developing my own work with the vision of sharing authentic stories to help promote intercultural understanding and to redefine the arts scene.